I've been meaning to post this for a while...

So!  After hearing good things about Busch Gardens and Colonial Williamsburg we decided to take the kids to Williamsburg, VA for Spring Break.

Getting there...
Some families can drive at night to save time while the kids sleep in the car. Our kids don't sleep well in the car so we decided to just leave first thing in the morning. It means we spend a day just driving but we didn't want to start off the week with grumpy sleep deprived kids.  Google maps estimated about 5 hrs but it took us closer to 7 with all the pit stops and traffic that we hit. The three older kids did fine in the car... the girls sat in the back and chit-chatted almost the whole drive. Paper and markers are all they need to be occupied.  E just entertained himself with a few car toys that we packed. I was actually surprised at how low key and easy he was.

But now L who is 16 months... was super bored and I had to entertain him with songs and whatever toys or objects around the car I could find. Entertainment went something like this.  I'd hand him a toy.  He would examine it for a few seconds... if we're lucky a few minutes.. then tosses it to the side.  And of course it is the opposite side where I can't reach and would have to unbuckle... stretch over his carseat... then blindly search with my hand to retrieve the toy.  This happened often because of course right after he throws the toy, he wants it back!

So during his "nap time" was when we pulled out the electronics for the older 3 to watch with headphones. Though L normally takes a 2-3 hr nap in the afternoons, he only napped 30 min in the car. See... my kids just don't sleep in cars...

Accomodations...
With 4 kids ages 7 and under, we really did not feel like all squishing into a small hotel room.  Plus, we've reached the limit they would allow for folks in 1 room and would have to get 2 rooms now!  5 is the limit unless you get a suite...

So we got this deal through a travel club to stay at King's Creek Plantation for a little over $400 for the whole week. We had 2 bedrooms, 2 full baths, a full kitchen, a living room, and most important of all... a laundry machine. I think we ran the laundry at least once a day because of soiled clothing from either food spills or just diaper overflow. Added plus was an indoor swimming pool and 2 hot tubs (which I used one night after the kids were sleeping). There were other activities and such that they offered but we didn't have time for. There was even a playground and miniature golf that was all part of the complex and included in our stay... but again, we just didn't have time for it... plus it was super cold the first few days.

The theme park...
Well, this was our first time at Busch Gardens. We got this Spring Bounce discount online which was a great deal. Kids 5 and under are free so we only paid for 2 adults and 1 child. Plus, it gave us unlimited access for 7 consecutive days to both Colonial Williamsburg and Busch Gardens with free parking.

Busch Gardens is definitely a beautiful park and it was neat to walk through the different European "country" themes.  They had enough kiddie rides to entertain the little ones and some pretty impressive coasters as well.  Perhaps compares to other parks that we've been to so far with our kids... this one stands out because of some of the thrilling rides.

The rides...
So we spent a lot of time in Land of the Dragons and Sesame Street Forest of Fun.  Even our youngest who is not yet 17 months could go on most of these rides without an accompanying adult.

Some rides L went on included:


My more daring 5 year old enjoyed Grover's Alpine Express even though her 7 year old sister didn't want to try it.

Surprisingly, both girls loved Curse of DarKastle! They probably went on this ride at least 6 times.  I must say it was a pretty cool ride because you wear these 3D glasses and it literally feels like things are being thrown at you. The simulation was impressive and I felt like I was inside a cartoon. Sitting in the front totally made it seem more real.

Other rides the kids particularly enjoyed included:
Now it's been a looong time since I've been on any thrilling coaster rides. This trip I had time for two of them.

We will definitely have to go back to Williamburg, VA.  I want to check out some of these other coaster:

The Food...
I was actually pretty impressed.  Trapper's Smokehouse has delicious smoked spare ribs!  I'm getting hungry just thinking about it.  We liked eating at Das Festhaus because they have indoor seating and live entertainment with singing and dancing while we eat our meal.

Their food deal that you can get online wasn't really that much of a deal but I suppose you save a little if you know you will buy lunch at the park.

As for snacks... they had your usual park foods.  My favorite are funnel cakes.  The kids liked the churros.  And of course... who doesn't like ice cream! 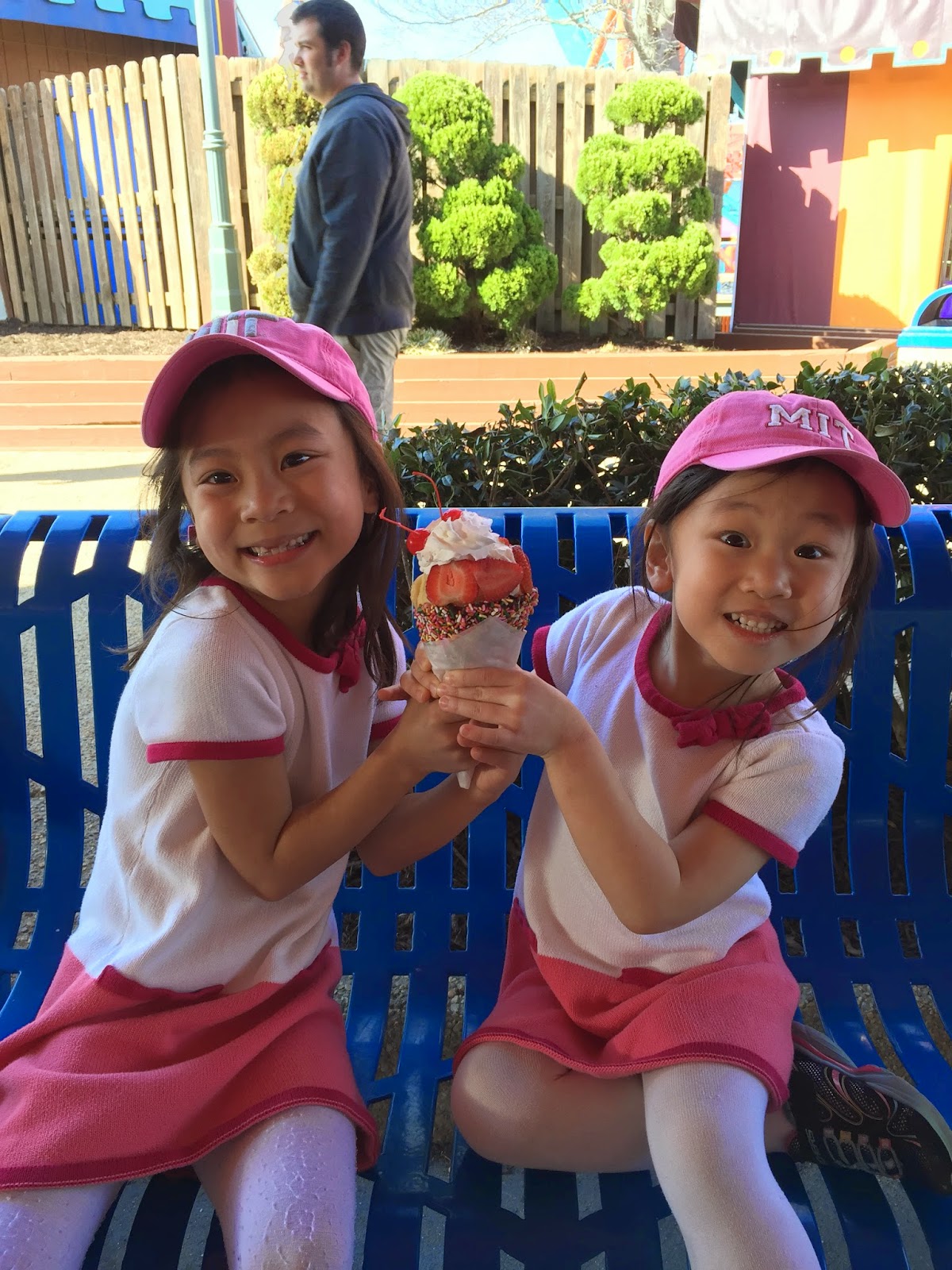 All in all... it was a nice family park and we'll likely go back when the kids are older to try some of the bigger rides.  This time it was super nice to only have to pay admission for 1 child!

Colonial Williamsburg
Now Colonial Williamsburg was a different kind of treat.  I can only say it was super cool and we will definitely be back when the kids are older to appreciate the history and education of it more.  This time only my second grader really got it, though both girls loved the wig shop and the clothing shops. Kudos to those folks there who stay in character the whole time!
Posted by Dr. Ellen at 7:02 AM