2016 flew by and as I looked through pictures to make my annual calendar to give as gifts to the grandparents, I thought about all the memories being made. Usually I pick the happy moments to reminisce and re-live... however, I realized that no matter how grand or small.. how awesomely joyful or hair pulling stressful... precious memories are still being made.

"How was your Christmas?" was a common question I got asked the week following the holiday. This year, I had to chuckle and I actually struggled to answer. One would never be able to guess based on the handful of pictures I chose to post on facebook for extended families and friends...  but it didn't capture the full extent of emotions that erupted that day.

So we were hosting Christmas dinner this year and during the start of the night when everybody was just getting into the meal, my oldest throws up in front of everyone. In the nick of time, dad caught on that she wasn't feeling well and fervently urged me to grab a bucket. We got it just in time and headed over to the bathroom where everyone can still hear her retching. I then ushered her upstairs to get showered and changed and a speedy goodnight to all... at this point we were not sure if this was infectious as she had no signs of illness prior to this. Later that night, was not so fortunate for her dad and me as we had to do several rounds of laundry and bed sheet changes.

But back to the Christmas party... it was now gift exchange time and my #3 kid decided to have a melt down because he "didn't like his gift".  Now understand, if this gift was given to him in isolation he would have loved it. In fact, even as I write this I can say that he has played this game several times since that day and absolutely loves it.  However, the combination of being overtired and probably comparing at the time with what he might perceive as more glamorous gifts being opened at the time... he cried. So second kid to be ushered upstairs with an early goodnight to all.

I then wearily climbed down the stairs thinking "Whew!  Now, I can have a decent conversation with my aunt who flew all the way from Houston to visit." But wait... is that another kid crying I hear?  Why of course... what was I thinking that my night would end so easy? So down to the basement I go to find my #2 kid hysterically sobbing and holding her head. Big huge egg on her forehead because kid #4 threw a frying pan at her.  A toy frying pan you may ask?  Oh no... this is a solid iron medium size frying pan. Why is a frying pan in the basement you may be wondering... well... not to throw anyone under the bus...  but let's just say we all make poor judgement calls at times... and yes, my youngest shouldn't be throwing things at people.. but why is a frying pan in the basement with all the toys??!

Ok. So take frying pan away from kid #4 and now kid #4 joins in the screaming because he wants it back. O what a night! So you can understand why I got a little emotional when aunt then gets whisked away by my dad before I had any decent conversation with her...

Now Christmas 2016 is going down in the Kim books as one memorable Christmas... one day when these kids are older... and maybe their significant others are also sitting around... we'll go around the table saying "remember that one Christmas where you threw up... and you had a fit because you didn't like your gift... and you threw a frying pan at you??!!!"  ...and then... we'll all laugh... 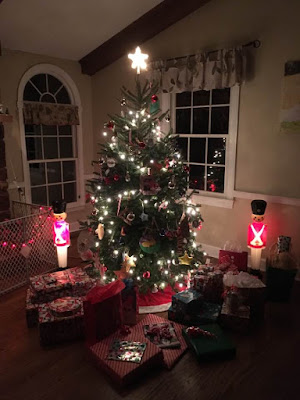