Husband and I just celebrated ten years of marriage!  We've been planning for a while to go somewhere without the kids and we did it.  Initially, we were thinking of going somewhere exotic... but given that our kids are still so little and my youngest isn't even weaned yet, we stayed in the country (I needed to be able to call my caregivers without worrying about a huge bill).  So we ended up choosing Key West.  Mainly it was based on a recommendation... but why not... still in the same time zone and yet far enough south to feel like we are somewhere exotic.  In fact, our first time there was ten years ago on our honeymoon, when we took a Bahamas cruise on Royal Carribean.  Funny thing is, the very first thing we can see out our balcony was a docked Royal Carribean boat! 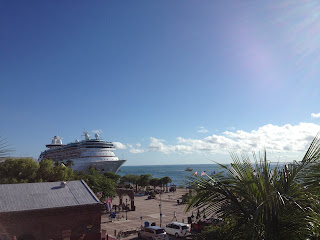 Now, my original thought was that we were going to spend the entire time pretty much sleeping in and lounging around relaxing.  However, the active inner side of us... (ie.  the other part of our honeymoon was attempting to ascent Mt Rainier... different story for another post)... lead us to a day of crazy water sports.  We got thrown into the ocean a few times between trying to water ski for the first time and riding a banana boat where the driver's main goal was to throw us in as many times as possible.  We also wiped out riding the wave runner because hubby was going a million miles an hour and took a super sharp turn without slowing down.  It was all fun but boy... was I sore the next day!

So of all the different places we went to eat.. including some fancy dinner places with great sunset views... the one meal that stands out was at this food truck called Garbo's Grill.  We found it using yelp... 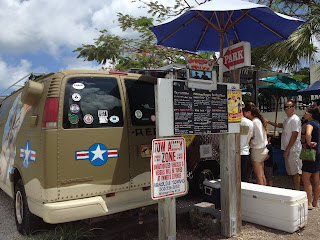 I was totally bummed they were closed for lunch the following two days because one day was Sunday and the next day was Memorial Day.  I'm totally still craving the fish tacos (made with grouper)!  Yummmm!! 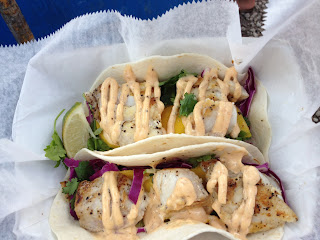 So our kids actually did pretty great with us being away.  It helped that they kept to their same routine and was in their same environment.  By now, they were also used to our au pair who had been with us for almost a year.  Plus, they are very familiar with grandma and grandpa.  I definitely missed them and thought of them often, especially when I saw other little kids.  However, it was a well needed break.

So a few tips I have on going away for a weekend if you have little kids...
Alright.. will finish up my Disney blog series with Magic Kingdom next post...