Today is my second daughter's four year old birthday.  I'm thrilled to be done with the three year old stage.  That was definitely a tough stage... much worse than two's in my opinion.  Here are some characteristics that describe my #2.

Fiercely Independent...
This is where the child wants to do everything by themselves.  Actually, this characteristic starts around age two.  However, when the almost two year old starts displaying this stubborn independence, it is funny at first and I can't help but laugh.  It cracks me up to watch my two year old get off the chair and back on again because he wants to get on by himself without help.  However, at three this independence takes on a new level of determination and defiance even.  It is no longer funny and I find it extremely frustrating at times.  At the end of the day, it is all part of normal development though each kid may display this with varying degrees of seriousness.  My little A was such an easy child until she hit this stage.  I love her fearless spirit but I hope we are seeing an end to the dragged out morning battles of picking out clothes.  Her quest for independence makes even the simple routine of teeth brushing into such an ordeal.  It is great that she knows what she wants but it has been a challenge trying to teach her that sometimes you get what you get!

Oh So Mischievous!
Perhaps it is a second child thing, but A is definitely my sneaky "let me see if I can get away with it" one!  In September, my husband and I went away for a short trip and when we came back, this is what I discovered under my bed covers!  None of the caregivers had a clue. 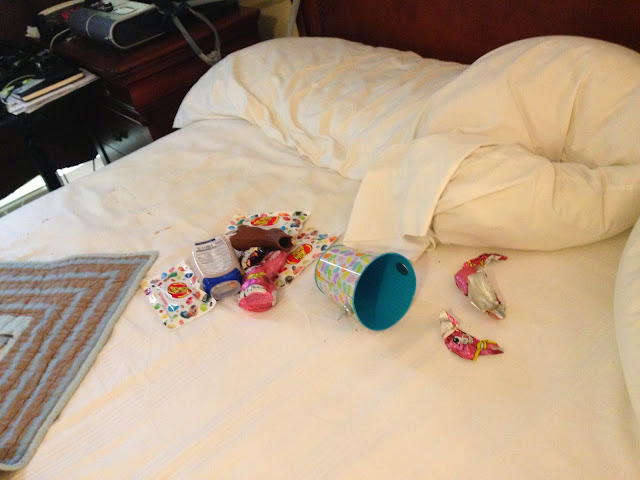 Further more, I had to discover this myself and then it is like pulling teeth to get this one to confess whereas my older daughter would have burst into tears and confessed the minute we walked into the house!  Other examples of fun discoveries include a stash of food from our basement refrigerator that Miss A hid in her princess tent which we did not uncover until two days later.  Unfortunately, we had to throw away quite an amount of groceries since most of it was perishable.  Now only a few days prior to this episode she led an egg smashing adventure with my two year old who was more than thrilled to follow her example.  My husband came downstairs to a site of giggling hysterical kids surrounded by broken eggshells and eggyolk all over our basement carpet!  That was so not fun to clean up.  So as a result, we now have a lock on that refrigerator.

But despite all this... it is hard to stay angry at this little one because she is just so cute, smiley, and hugable!  So another characteristic that stands out above the rest...

Loving and Full of Affection
A's love language is physical touch (which I got from The 5 Love Languages of Children... great book by the way, if you haven't read it).  I treasure her spontaneous declarations of "I love you, mommy" followed by a hug and a kiss.  She almost always has a smile on her face and it is such a delight to hear her gleeful giggle.  My favorite moment with her is cuddling before bedtime.
I love you so much, A!  Sometimes, I wish I can slow down time when I watch how fast you are growing and becoming so self-reliant.  However, I'm thankful that God blessed us with you... my sweet, cuddly, playful girl.
Posted by Dr. Ellen at 3:16 AM