On vaccines and such 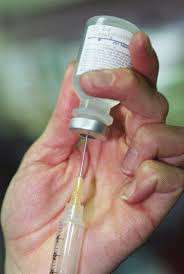 It's National Infant Immunization Week!
So I had another patient today who is on a "delayed vaccine schedule". It seems like we are getting all the folks who do not want to follow the traditional vaccination schedule that is recommended by CDC (Center of Disease Control). Maybe we are just seeing a population that surfs the internet a lot and likes to do their own "research" on things. But we are also getting folks who come to us because their respective pediatric offices are either giving them a hard time about it or are refusing them as patients all together.

I understand this is a hot and controversial subject and there are probably millions of web pages out there dedicated to just this topic alone. Not wanting to go into all the nitty gritty, here are a few of my thoughts as a physician and a mom...


As a physician...
So you got to look at this from a public health point of view. The stats are that certain diseases used to be prevalent and used to cause a lot of hospitalizations leading even to death. Vaccines changed all that and a lot of the diseases are prevented now. Here in the US, I think we take a lot of things for granted. Visit a third world nation and there you will see a lot of the sicknesses/complications that arise from diseases that we hardly see here anymore because of our immunization program.


As a mom...
I definitely understand the fear of harmful side effects. It is especially hard if one knows people who are strong opponents to vaccination... plus it doesn't help to have such opposition from famous actors and such. At the same time, I'd feel bad if my child came down with some disease which I could have prevented with a shot. So as a mom, I'd have to weigh the pros and cons and make my decision based on which is the greater good... or lesser evil... however you like to look at it.
At the end of the day, it boils down to whether or not you believe the scientific research that is out there... all of which points to no evidence linking vaccines with autism (one of the big fears out there). Sure, there still may be reported side effects... but most are mild and self limited. Again at the end of the day, it is weighing the pros of disease prevention and the con of potential rare side effect.


Both my kids are vaccinated pretty much on schedule. My older child got everything like clockwork. I decided to space things out with my second child as a personal experiment to see if I notice any difference. There is no power to my personal study, I just thought I'd spare my daughter multiple needles at once. Now, she is only 5 months but really the only difference I see is that it is more of a pain to remember when certain shots are due.


So at the end of the day, I do advocate vaccines. However, if someone wants to spread out the shots instead of giving multiple needles at once, I don't see the harm in that. The danger of course is getting behind and forgetting to keep up and/or losing track of what vaccines need to be given. Now a few or our parents are taking a huge risk in completely not vaccinating their children. Unfortunately, they are not only putting their own child at risk but also the community.
Posted by Dr. Ellen at 12:11 AM